Brazos Bend State Park is roughly an hour southwest of Houston, Texas. In this park are many alligators, which is surprising to many people. After all, this is Texas, home of cowboys and The Alamo…

Actually, there are alligators all along the Texas coast, from Louisiana to Corpus Christi, but this State Park may have the largest population per acre in the state. They’re in the lakes and swamps, and they love to lie in the warm sun on the trails.

Gayle looks forward more to photographing the alligators than the birds in the park – and this is one of the best places I’ve seen for birds!

On this trip, we had just arrived, and as soon as we were settled, we headed out to the trail around Elm Lake. Gray clouds filled the sky, and although not dark, they weren’t the kind you wanted to have behind your subject. As we walked the trail, I saw several Black-bellied Whistling-Ducks in a dead tree not too far away. I stopped and took some photos, trying to silhouette the ducks against the gray clouds.

Gayle had kept going down the trail, but she was within my sight. After I took a few photos, I headed her way. When I was close enough, I could see she was set up near an alligator…

She got some pretty good images, including this one. 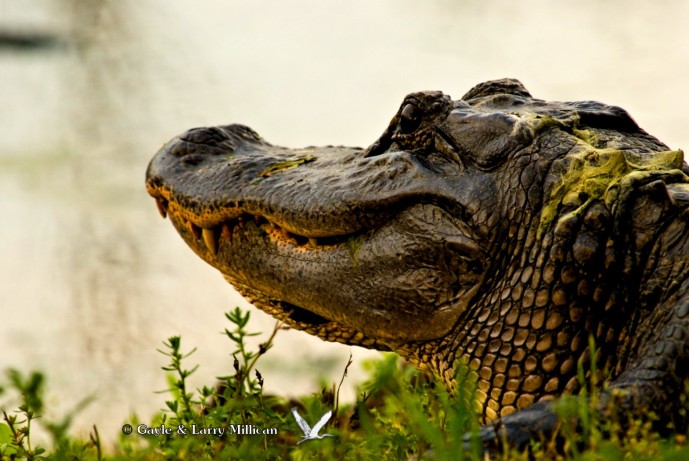 After photographing the gator for a while, I saw that the clouds were beginning to break up. I dragged Gayle away from the alligator, telling her that we were about to be blessed with a great sunset. We headed back to the spot where I had photographed the ducks earlier.

Sure enough, after we had barely set up our tripods, the sun began to make its appearance.

Gayle’s first photo of the sunset, her zoom lens set to about 200 mm

We each took about 20 photographs, then it was over…

Lessons learned: Keep your eye on the sky, and always be ready, for anything!

6 thoughts on “Of Alligators, Ducks, and a Sunset”